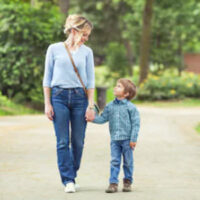 In July 2019, a new law took effect in Georgia which grants certain third parties the ability to seek visitation (and in some cases, custodial) rights to children they have helped to raise. The projected outcome of the bill’s passage was uncertain, with many worrying that the new law extended rights too far and was not in the best interest of the child or children concerned. However, it has also made a significant difference for many non-related caregivers who now have the chance to be a fixed part of a beloved child’s life.

Custody Based On Bona Fide Relationships

Before the passage of this bill, people who had played a significant role in raising a child, but who were not related to the child, had no legal status whatsoever. If for example a parent  decided to suddenly move without leaving any forwarding address, caregivers such as stepparents or other childcare providers  had no way to either find them or legally demand any kind of relationship with the child. While no real statistics exist on the outcomes for children in these kinds of situations, it is not unreasonable to assume that many children suddenly removed from non-related caregivers did not have their best interests served.

While the new law has made a difference in many people’s lives, the potential for problems is nonetheless there. It can be seen as galling or even unjust if a court decides to award custody to an equitable caregiver over, say, a grandparent or other blood relative, and long, contentious litigation can ensue if the two sides cannot work out some sort of compromise. There may even be three sides, if a mother, father, and equitable caregiver all have valid claims to custody.

In addition, there are still some parts of the new law that appear vague and will probably require litigation to clarify, which can lead to problems until that point. For example, the law requires the equitable caregiver to establish their “full and complete undertaking” of a “permanent, unequivocal, committed and responsible” parental role in the child’s life, with no financial expectation. These are questions of fact for the Court and open to interpretation and debate.  While the State is required to act in the best interests of the child, it can be quite difficult to determine sometimes exactly what the ‘best interests’ are.

The state of Georgia is expanding its definition of family, and while the aim is good, there may still be confusion and issues in working out the details. If you have custody questions, it is a good idea to contact an Atlanta child custody attorney at Buckhead Family Law. We are happy to try and sit down with you to work out what the best path for your family might be. Contact us today to schedule a consultation.