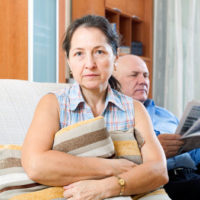 In recent years, divorce statistics have shown two phenomena that until now was decidedly unusual – a lower rate among younger couples (under the age of 30), and a markedly higher rate of divorce among couples aged 50 and over. The latter is referred to by statisticians as ‘gray divorce,’ and it is becoming more common as seniors live longer. If you and your spouse are considering divorce, but you are over the age of 50, you should be aware of some potential roadblocks that older couples need to address, while younger couples may be able to let them slide.

Data from the Pew Research Center shows that the divorce rate for couples over 50 has almost doubled since the mid-1990s. While the divorce rate for couples under age 50 is still roughly twice as high as that of those over 50, it does mark a rise from previous levels, and there are multiple reasons that one can pinpoint as potential causes. Many of which have to deal with the simple fact that baby boomers, currently in their 50s and older, are simply living longer – as older people enjoy better health for longer, they see no reason to remain in a marriage that may have lost its luster.

Another common set of reasons that many older couples give for divorce is based in economics. Many spouses, especially wives who were married in an era when husbands held the proverbial purse strings, are interested in striking out on their own, and with increased job opportunities and better health, it becomes more feasible to do this. If one is able to work, there is no reason why they should not, and with work comes increased independence.

If you and your spouse are over 50 and planning to divorce, it is important that you be aware of issues that you need to manage, mostly financial in nature, that younger couples need not deal with until later on. Perhaps the chief among them is understanding where you stand on Social Security, especially if you do not plan to work or work part-time after divorce. If you have been married for 10 years or more, and have not remarried, you may be able to seek Social Security retirement benefits on your ex-spouse’s work record instead of your own, if you are over age 62 and your ex-spouse is eligible for benefits.

In addition to Social Security questions, you may also have to deal with dividing retirement instruments like 401(k)s. Georgia adheres to the equitable distribution system for asset division, so this means that the asset will almost certainly not be divided equally – equitably means fairly, so it is very likely that the court will award a slightly larger share to a spouse who may have, for example, less likelihood of remaining in the workforce or getting back into it at all. Either way, knowing where you stand is imperative, especially for those over the age to receive Social Security, because it can be difficult to retire after a divorce given that the money you saved must be divided with your spouse.

Divorce at any age can be a drawn-out process, but if you are older, it can seem as though it may never be resolved satisfactorily. Calling a knowledgeable attorney can help take some of the burden off your shoulders. The dedicated Atlanta divorce lawyers at Buckhead Family Law can sit down with you and try to help guide you through the process. Call us today at 404-600-1403 to schedule an appointment.